North Cyprus is one of the most magical places in the world, full of mystery and Mediterranean fragrance. A journey to this most Mediterranean paradise will reward you with glimpses of historical sites which have witnessed a 10,000 years history, an impressive cultural heritage and different glorious treasures of the material world at every season of the year. 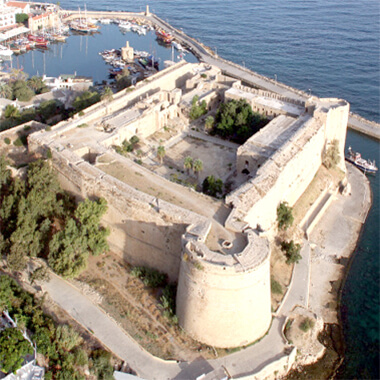 Kyrenia was founded at the 10th century BC., by Achaean settlers and was for many centuries one of the ten kingdoms of Cyprus. In the 7th century it was fortified by the Byzantines who built the original Kyrenia Castle - later expanded by the Lusignans and then the Venetians. The British built a harbour and a quay.

The town still retains its character with many restaurants and bars by the harbour and hotels spreading east and west of the town with sandy beaches. The region, now an attractive holiday resort, boasts many historic sites worth visiting. Among these; the Kyrenia Castle and the Shipwreck Museum, the St. Hilarion Castle, the Bellapais Abbey and the Old Harbour are the most important. 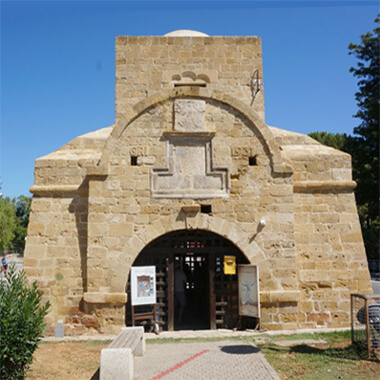 Nicosia, the capital of both North and South Cyprus, is currently the biggest and most densely populated city on the Island. The developing, urban, yet historic and charming city of Nicosia is the major centre for arts, culture, diplomacy and business. Nicosia hosts beautiful examples of Gothic and Ottoman architectural forms. The city flourished during the Lusignan era; churches and palaces were built and with the Ottoman period, the city gained new vigour, and mosques, baths and other institutions were established, and a new building activity began, and Nicosia grew in size and population. 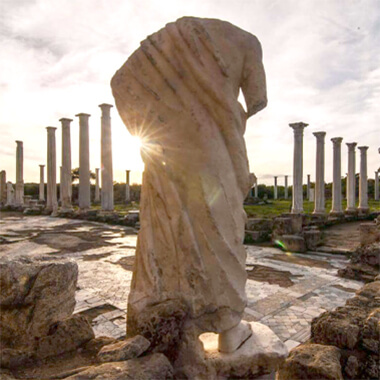 The city of Famagusta was originally a small commercial port and fishing village. Famagusta lies on the eastern coast of the island, and poses the deepest harbour in Cyprus. The walled town and the areas around the city are peppered with ruins of civilizations ranging from Assyrian, Greek, Persian, Roman,Byzantine, Lusignans and Venetians.

Famagusta still hosts some of the best examples of medieval architecture. The golden sandy beaches of the bay of the city are well known through the world. 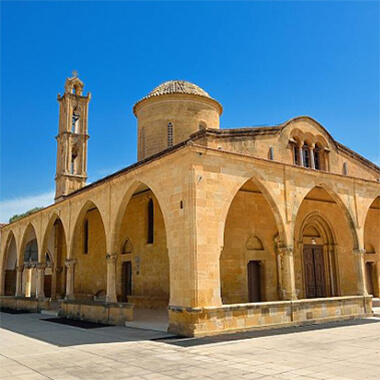 Guzelyurt is a market town located in the west of North Cyprus, and is the regional capital of the Guzelyurt district. It is one of the richest agricultural areas of North Cyprus, famous particularly for the citrus (orange, lemon & grapefruit) and strawberries. They thrive in Guzelyurt's fertile red soil. A large portion of the citrus fruit is exported, and the rest is made into fruit juice and canned for local consumption as well as export.

The town was founded by the Spartans, who brought with them the worship of Aphrodite. In the middle ages, the city was referred to as Morphou, and also Theomorphou. The Morphou area grew more than half of Cyprus's citrus fruits.

Guzelyurt is not a typical tourist destination, but it is interesting to those who want to see a part of North Cyprus which is least affected by tourism. 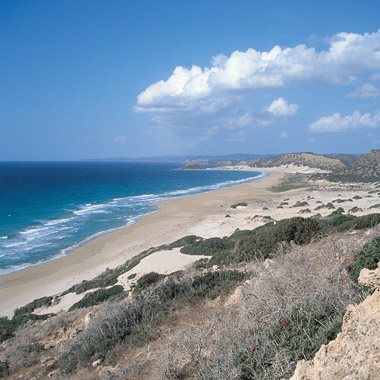 The Karpas peninsula, the easternmost part of the island, is where the land tapers into a thin strip which stretches towards Turkey. Known as the panhandle of Cyprus it is a breath-taking adventure. Secluded beaches go on for miles, and the green of Cyprus blends with the turquoise of the Mediterranean. It’s lovely, unspoilt and the gorgeous countryside is so inviting that one can't help falling in love with Karpas at first sight.


*Breaks depend on the season. In the summer season, break at Golden Sands Beach, and Dipkarpaz Village in winter. 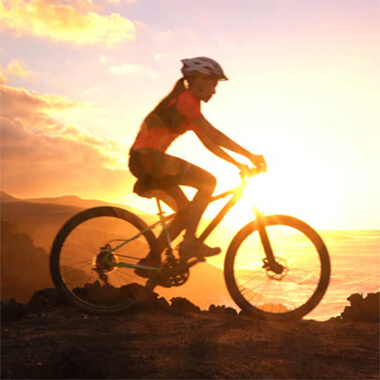 The mountain biking trails in our program are spread out geographically, covering a variety of topography to give you a well-rounded feel of North Cyprus. We will visit Güzelyurt, the citrus capital in the flat west, Kyrenia Mountain Range with views of the Mediterranean in the north and the plains in the south and along the secret beaches of Karpaz peninsula in the very east. The mountain biking trails are mostly made up of narrow forest roads and occasional tarmac roads with little or no traffic.

In general, the rides are leisurely with intermittent breaks for snacks and exploring interesting spots such as the Kantara Castle, abandoned Copper mines of Lefka, aqueducts of Lapta, and the roman chapels of Karpaz. All rides are accompanied with two local guides providing guiding, interpretation and technical support. The difficulty of the trails requires skill level “B” and fitness level “2”.

Skill Level B: Can cycle on loose gravel, off road trails, typically at trail centers but stays away from any demanding terrain such as rocks and roots.

Fitness Level 2: Cycles two or more times per week at a steady pace for 3-4 hours and likes rolling trails with some long climbs. 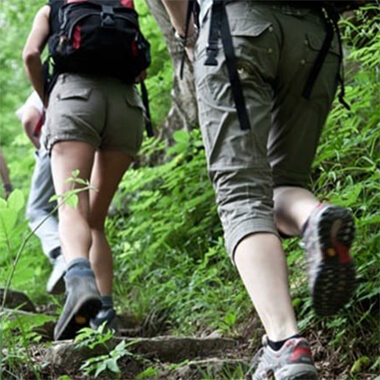 Cyprus, the island of Aphrodite, belongs to the most beautiful destinations at the Mediterranean Sea. Due to the fascinating coasts, forest and mountain landscape North Cyprus is a walking paradise. The multifaceted scenery offers many different places of excursions.

Hiking in North Cyprus offers many opportunities to experience a unique natural environment. One of the sole features of North Cyprus’ habitats is the wild and sharp differences in elevations and habitats in different parts of the island as well as different climate conditions, all of which supply a diverse habitat for a unique collection of flora and fauna. Hiking in the trails offer you to examine the unique vegetation of North Cyprus with its endemic plants and flowers, like orchids, tulips, coastal sand dunes, shrub lands, olive groves, juniper bushes, and pine and cypress forests on the mountains. In addition to flora and wildlife, look out for remnants of the island's fascinating history along your walking route.

The difficulty of the trails consists of easy, medium, difficult and very difficult. From novice to expert, there is a perfect trail for every level of expertise. 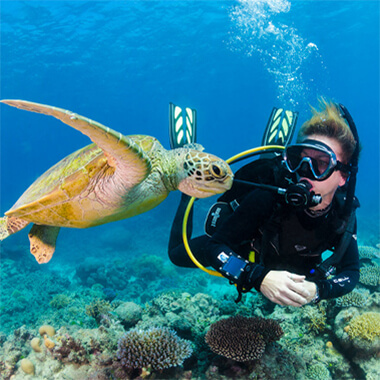 Likely named for its most famous daughter, Aphrodite (the goddess of love and beauty) and also called Kypron in ancient Greek, Cyprus is a special island surrounded by the deep blue Mediterranean and washed by the gentle currents running along the Egyptian coast across the opening of the Suez Canal, carrying marine life from the Red Sea, such as parrot fish.

North Cyprus is a totally new destination for divers, with the most exciting reef formations in the Mediterranean where you will find in large numbers of marine life and an incredible variety of marine species of all sizes. With unique diving sites at the east and west of Kyrenia region, diving with Wintersun Travel and Cyprus Dive Shack, makes it possible to explore the fascinating and unique underwater world of the island, where you can enjoy one of the longest diving seasons in the Mediterranean. From simple, sandy-bottom dives for beginners, to excellent enriched air diving on the Zenobia, named one of the world's top ten dive sites by The Times in March 2003, the island's diving offers something for everyone. 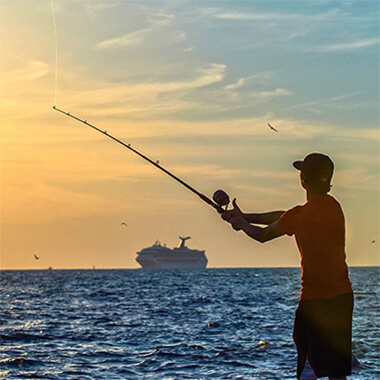 The Mediterranean Sea is a very important area for fishing resources. The north coasts of Cyprus, especially Kyrenia coast, is one of the best areas to fish for Albacore tuna in the Mediterranean, so much so, we're almost guaranteed a catch.

Our deep sea fishing trips start in the Kyrenia Harbour. It is here where you will board on our specialist fishing boat “Alp” equipped with all necessary equipment to fish and to ensure a fair battle between fish and fisherman. It's a very short trip from Kyrenia Harbour to reach the fishing grounds and the trip lasts approximately 6 hours and includes swimming.